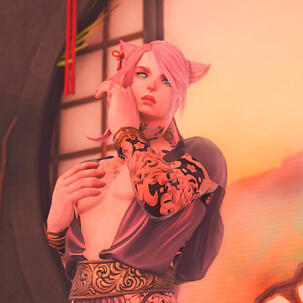 A former kagema turned 'revolutionist' hailing from the far East with a penchant for trouble and adventure. 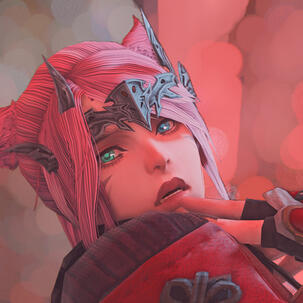 Bohai was barely four years old when Doma was taken over by Garlemald and his proud samurai father, Kiyoshi Sugimura was killed in battle. He was spirited away to Kugane by his mother, Guiying, alongside his older sister Kaori. It was during their perilous journey that his older sister fell deathly ill. While his mother, a practicing medicine woman, tried in earnest to keep Kaori alive, she couldn't. His sister perished in the Spring of that year shortly after they reached Kugane.

They were fortunate to reunite with his father's family. His grandfather, Mitsui, was a renowned kimono maker in Kugane who was quite known for his craft. Upon learning about the death of his son, Hiroshi took it upon himself to raise Bohai in his son's place. It's because of his grandfather's tutelage that Bohai learned the tips and tricks of the craft. He was just ten years old when he started sewing fabric for his grandfather's shop. As the years pressed on, Bohai eventually became a specialist in his craft. When Bohai became sixteen, he started taking over his grandfather's commissions from the local geisha and miko of the Karyūkai District which helped his way to fame.

However, his newfound business and popularity earned the attention of the Garlean emissaries stationed in Kugane. His grandfather often only did business with the locals but wouldn't shun outsiders seeking to own a kimono of their own but Bohai did. He refused to sell any of his clothing to the Garleans, often stating that such violent dogs had no right to wear the clothes of his people. News of his defiance quickly became the talk of the town. While his grandfather pleaded with him to cause a fuss, Bohai continued to refuse. It's because of his defiance that the Garleans decided to heavily tax his family's shop, virtually making it impossible for them to earn any revenue. This forced his family to close their shop which caused his grandfather to die from grief.

Feeling directly responsible for his family's decline, Bohai left Kugane at age eighteen. He joined among the ranks of the Confederacy, a band of pirates that ruled over the Ruby Sea. He worked for the pirates as a smuggler who helped procure foreign goods from Eorzea. His time with the pirates was tumultuous at best since he wasn't much of a fighter and lacked nautical skills. It took him a while to learn how to swim, nevertheless learn how to be a pirate.

However, Bohai was always quite the looker. It was easy to confuse the poor boy for a girl and even easier so for Bohai to use his looks to get what he wants. So instead of being a pirate, Bohai became more of an "informant". He worked at the various teahouses in Kugane as kagema so he could spy on the invaders that seized their homeland. While he wasn't particularly proud of his line of work, Bohai was able to send information back to the pirates in hopes of keeping the Resistance one step ahead of the Garleans. While the pirates of the Ruby Sea always liked to proclaim their neutrality in terms of the war, Bohai knew it would only be a matter of time until the flames of resistance would be stoked once more.

✣ He's A Pirate: As explained in his biography, Bohai is a former Confederate pirate hailing from the Ruby Sea. While he's been trying to readjust back into society shortly after the Garlean's defeat in Doma, Bohai sometimes falls back into his old habits. He's nice on the outside but rough on the inside. While he does his best to put aside his rough and tumble personality, it's rather rough for Bohai to have to use words rather than a cutlass to make his point. Bohai has a habit of turning to violence when pushed too far and doesn't seem to show much regret for his actions.

✣A Fighter at Heart: Don't let his cutesy appearance fool you. While Bohai is rather petite and frail-looking in appearance, he's a bit of a wildcat when it comes down to combat. He loves the thrill of combat and often looks for a good challenge. He's one of the many champions of the Grindstone and an active member of the Crimson Duelists. He's always up for a good spar but sometimes he tends to hesitate out of fear of accidentally killing his opponents. As much as he loves to fight, Bohai doesn't want to take a life. Those days are behind him but he still gets the itch for combat regardless.

✣Weaving Kimonos: Despite his rough around the edges persona, Bohai happens to be a rather accomplished kimono weaver. The art of crafting kimonos is no small feat since it requires hours of practice and patience. It takes him weeks on end to finish a single order since he's doing everything by hand. It's because of his profession that Bohai is always on the hunt for the best and finest silk in the land. Bohai takes great pride in his works and even has a store in Kugane called "Hinokami" which is named after his grandfather's old shop.

✣Mercantile: Bohai is always in need of new wares and fabrics because of his formal profession as a kimono maker. If your character happens to be selling exotic wares from other places, feel free to contact Bohai! He'll be interested to see what they're selling, especially tools for his trade. He's also very interested in arts and crafts like calligraphy and painting. So, he would be very interested in purchasing inks and paints for his craft.

✣Social Drinker: Bohai is a fairly social and fun-loving character but even he has his limits. While he can probably drink a Roegadyn under a table easily, the man doesn't like to drink too much. Nevertheless, he loves hanging out in taverns where he can meet new and exciting people. Bohai has a strong fondness for adventurers with stories to tell. So feel free to regal him with your character's many deeds and the likes. He'll most certainly listen.

✣Sweets Lover: Bohai (loves* sweets, especially dangos. If you really want to get on his good side, offer him something sweet. While he doesn't mind getting sake or other forms of alcohol, Bohai has a sweet tooth that often gets him into trouble.